The State of Emergency Mapping Project has completed Phase 2, by extending the database from 16 to 21 years of coverage – the period 1995-2015. With more than 300 entries on human rights derogations, their causes, duration etc., this extended version of the original database provides deeper insights into the causes and effects of emergency declarations.

Also the methodology has slightly changed. Given the UN’s effort to digitalize their archives, we were now able to directly access all depository notifications, rather than to rely on the annual reports of the Human Rights Committee (HRC). This added another layer of insight as the respective depository notifications usually give an insight into the reasons behind the declarations.

The database is accessible as an Excel file.

Furthermore, Dr. Leonard Fister, was lead data scientist in charge of data analysis and visualization of this second phase. The documentation and the underlying source code (R code) are available on the homepage as open source files (download links below) – for anyone to use, modify and extend the analysis to gain further insights. 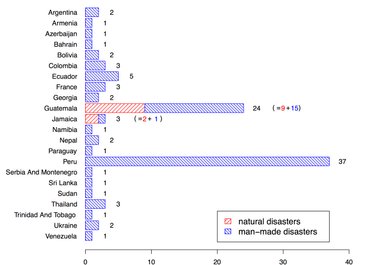 Some of the key findings: 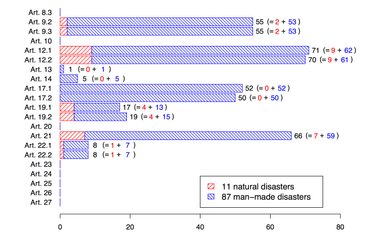 For SoEs of known duration, natural disasters make up only 6% of all events. They have a rather short range from 6 to 60 days, however, the distribution is peaked strongly around 30 days, as this duration occurred 14 times (when extensions of previously declared SoEs are counted separately). Both durations of 6 and 60 days were each seen twice, while once an SoE of 32 days was declared. 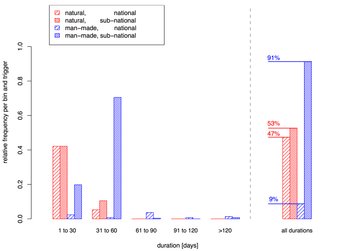 A preliminary analysis shows that man-made disasters are much more susceptible to extensions and consequently long term durations as there were 87 original declarations and 211 extensions. When excluding the longest 6 events (3 of which extensions), the man-made SoEs show a mean of 52 days and a standard deviation of 19 days. In comparison, the relative short term duration of natural disasters and their original 11 declarations and 8 extensions show a mean of 31 days with a standard deviation of 13 days.

For researchers interested to delve deeper into the data and the statistical analysis, we provide open access to:

Please cite our data as follows: